A killer is stalking their victims on Glasgow's streets.

Men are being abducted, kept tied up for weeks and force-fed, then strangled and their livers are being removed.

Detective Inspector Duncan Waddell has enough problems not least of all that his best friend and colleague Stevie who's meant to be comatose is talking to him and only him. Now he faces his most bizarre case yet.
This time he has help in the form of FBI profiler Odessa Thorne who arrives as part of a new Police Scotland initiative.
When a career criminal comes forward to say he was targeted by the killer but somehow managed to get away, Waddell hopes it's the breakthrough they need. But can they trust this witness who's known to be a habitual liar?
As they close in on their ruthless killer Waddell must look into a heart of darkness to get his killer.
If you love gritty thrillers set on the mean streets of Scotland then you will love this book. 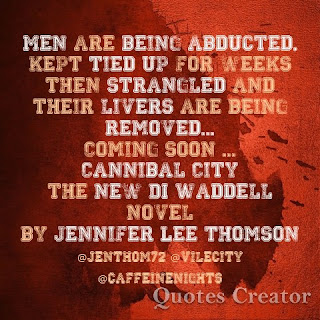 Chapter 1
When he came to, his head felt like a whoopee cushion somebody with a huge, fat backside had sat on. And what the hell was that shitty smell? Had someone taken a giant dump and left it to rot in the pan?
Warily, he opened his eyes, which wasn't easy because they were gunged up with sleep and his head was sore enough without letting any light in, but he had to see where he was.
Gradually his surroundings came into focus. He was in a room with stone walls, with strip lighting and he was lying on a mattress on a stone floor. In the far corner, there was a barber's chair. Located nearby was the source of the stench, a plastic bucket. He didn't need to inspect it to know it was full of shit; was it his shit?
Only shit smells like shit, his old man used to say (before he suffocated on his own vomit after a two-day bender).
Not remembering how he got here made anything possible.
He must have been lying down too long because his legs were numb. As much as the marching band in his head made him want to remain lying down, he needed to get the blood flowing in his legs or he'd end up with cramp.
Reaching down, he gave the tops of his legs a wee rub to try and get the circulation going. That's when he clocked the chains around his ankles. He followed the chain to a bolt embedded in the wall. When he pulled with both hands there was no give at all. Couldn't budge the bastard.
Fuck! Fuck! Fuck!
Where the hell was he and, more to the point, who the fuck was he? He couldn't even remember his own name. Had he been hit over the head? That'd explain the pain and the dizziness.
What was the last thing he remembered?
Think. Think. Think.
Knowing that would be a start. He'd a quick flash of someone grabbing some guy's shoulder bag with a laptop inside. Dozy clown had been too busy sipping his fancy coffee to notice it'd been snatched. Up and away you go.
How the hell would he know that? He must have taken it.
How could he remember stealing that bag and not even know his own freaking name? Was he concussed or drugged?
He was wearing jeans and a t-shirt with a thin denim jacket on top. Rummaging through the pockets, he found a few bookies’' receipts and one for petrol in the jacket, so he must have a motor somewhere. That was one more thing he knew about himself than he'd known a minute ago.
In the back pocket of the jeans, his hand closed around a plastic card. It was a gym membership card in the name Dennis Kincaid. Maybe that was who he was?
There was nothing else in the pockets but junk. Not even keys that he could use as a weapon because he knew he needed something. Someone had put him in this cellar and chained him up. And they could be coming back any minute, in through that door with the keypad that he couldn't get to because these bloody chains stopped him from moving any further.
He was scouring the floor, frantically searching for something he could use to defend himself when the door beeped then clicked.
Fists balled, he hauled himself to his feet and in spite of the dizziness, he managed to stay standing as he braced himself for what was coming. When he saw who came in through the door, he almost laughed. Had to be a windup. It was some guy in a Freddy Krueger mask.
‘"Is this a joke?"’ His words came out a rasp. Was he tripping?
The guy advanced towards him. Before he realised what was happening there was a flash and his whole body convulsed. Bastard had Tasered him.
As he writhed about on the floor, the guy spoke. 'Listen carefully. Do what I say and I'll let you leave. Try to fight me and you're dead. Deviate in any way from my instructions and you're dead.’
All he could do was listen as the stranger made his offer.
END OF EXTRACT

Posted by Jennifer Lee Thomson, Jenny Thomson at 03:26 No comments: