Coping With Rejection sucks but you can get through it 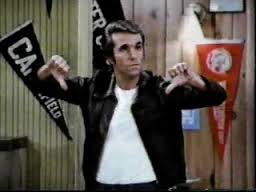 It used to come as the sound of your manuscript in a brown envelope thudding as it hit your doormat.

Now its more likely to come as an email which in a way makes it worse because until you've read it there's this tiny glimmer of hope that its going to be a yes and that in a minute you will be dancing around the rooming yelling, "Ya, beauty." (I'm Scottish and that's how I celebrate).

You read the email and usually the phrase you get is "it's not for us" or "thanks for sending this to us but you weren't successful on this occasion." Your head dips, your heart sinks and all the other cliches happen.

So, how do you get through this crushing sense of failure?

First off, don't see it as failure. Its usually someone's opinion - just one person. Do we all like the same things? Nope. So, why would we like the same books?

Besides, failure isn't trying and getting knocked down. Failure is not trying and putting yourself in a position to fail.

How many people do you know who say they're writing a book who never actually write a book? 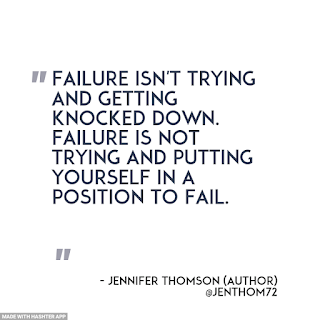 What else helps when you get that disappointing no?

Well, I like to watch comedies. After yesterday's thumping disappointment I binge watched Parks and Recreation.

Chocolate also helps. Probably so does wine but I'm teetotal and it would be too easy to drown your sorrows. If you know when to stop, you go for it.

Talking to other writers might help. My favourite forum is the TalkBack one from Writer's News. You'll find it here

Most importantly if you got any feedback at all treasure it. Publishers and agents don't say things they don't mean. My latest rejection said they liked the idea behind my submission.

Be kind to yourself, folks. Remember the path to a writer's success is paved with rejection slips and emails. It shows you've been brave enough to get your work out there.

Posted by Jennifer Lee Thomson, Jenny Thomson at 02:50 No comments: