Elisa Lam - What happened to the brilliant writer at the Hotel Cecil?

I watch a lot of true crime documentaries but you have got as under my skin as the mysterious case of Elisa Lam.

Few facts are known about her last hours. This is what is known.

Elisa was a 21-year-old student from Vancouver who travelled to Los Angeles to see America. An avid user of the social website Tumblr here who talked about being bipolar, she found the hotel on the internet and decided that she would stay there.

That decision would lead to her death.

The Hotel Cecil had a dark, dark history of murder, suspicious deaths, overdoses and suicides. It's been said that Night Stalker Richard Ramirez used to stay there and when one night he turned up covered in blood nobody batted an eyelid, such was the regular craziness at the Hotel Cecil.

Some people even believe it's haunted or cursed. Maybe both. 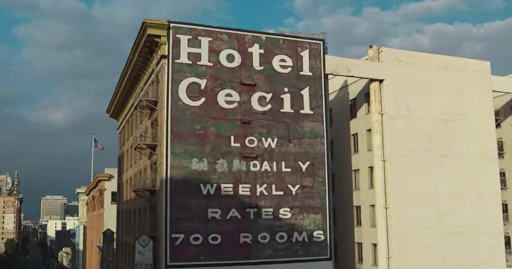 19 days after she went missing, Elisa's lifeless body was found naked in one of the water tanks on the hotel's roof. An autopsy was unable to establish how she died because of the damage the water had wreaked on her body.

After investigating her disappearance, police found hotel footage of Elisa acting erratically both inside and outside the elevator. At one point, she seemed to be talking to people or person's unknown outside the lift. In another, she's frantically pushing the button in the elevator as if desperate to get it to move.

The autopsy was long and drawn out. Ultimately it declared that this was a case of accidental drowning. There were no recreational drugs in her system or asthma.

Here's what I think happened to Elisa Lam. Please note - this is only what I believe happened -

She was in the hallway when she heard someone coming. She frantically jumped in the elevator to avoid them, frantically banging on the lift buttons trying to get the door to close. She made the same mistake many of us make when we're in a hurry and unwittingly pressed the buttons to keep the door open for two minutes instead of the correct ones to close it.

That's when she had a discussion with someone outside the lift. It freaked her out so much - as any interaction would in her highly stressed state - she ran up the stairs to the roof to avoid this person or persons.

When she got to the roof she thought she had evaded them but all she'd managed to do was leave herself with no escape or place to hide.

Then she saw the four water towers that supplied the Cecil Hotel's water. Not wanting to get her clothes wet, she hurriedly took them off and placed them on the edge of the water tank at a point she thought they couldn't be seen.

She climbed into the water tank

She then climbed into the water tank using her fingertips to try and desperately hold on to the top rim and waited for the person to leave. But she misjudged how far away the water was from the hatch or lid and as she tried to frantically keep herself from dropping into the water she accidentally pulled her clothes full in.

One item of clothing was heavy and sunk to the bottom. She went down to retrieve it and that's when she drowned because she couldn't get back out.

Her hiding place became her tomb.

This theory is pure conjecture on my part. We may never know the true story.

I have personal experience of living in the type of sheer terror I believe Elisa suffered in her last hours on earth. I suffer from agoraphobia - defined as the fear of wide, open spaces, to me, it's more about the fear I have of other people.

My agoraphobia was brought on by the extensive bullying I suffered throughout my teens. When I lived alone, I would go into hypervigilance mode and before I stepped outside I would check that the coast was clear. This would involve looking out the window, peering through keyholes, listening at the door for anyone coming. All part of the reconnaissance I would do before I would leave my home/room.

Her story draws you in

What we do know is that the Canadian student who wrote about the difficulties of growing up on Tumblr that she used like a Dear Diary, will never be forgotten. Through reading about her disappearance at the Cecil Hotel and watching the Netflix documentary, we feel as though we have gotten to know and care about her.

Elisa may have perished but she lives on in the minds of everyone who's heard her story and those who've read her amazing words on her blog.

I have no doubt that she would have made an amazing writer. Like so many talented people she died too soon.

Posted by Jennifer Lee Thomson, Jenny Thomson at 05:49 No comments: