How to survive family lockdown (without killing one another)

It's predicted that the divorce rate is set to soar under the pressure of couples being forced to live on top of one another during the lockdown. Close family relationships are also going to be seriously strained.

Here's some tips on how to survive that family lockdown without killing each other because the family that stays together drive each other insane.


1. Be careful with the movies/tv shows you watch - Try and avoid watching anything related to the apocalypse and cannibalism  and society breaking down. You don't want everyone waking up with nightmares because it'll disturb your sleep and that's the only me time you're currently getting.

2. Get rid of everything that annoys you - I'm talking about the harmonica your son's just discovered and is trying to play very badly. The drill your daughter has decided to use to hang up picture hooks in every bit of space on her bedroom wall. The guitar your partner decides to start learning to play.


Dig a big hole in the garden whilst nobody's looking and toss the unwanted items in the hole and bury.


Don't be swayed by nostalgic remembrances of happy days spent playing board games with your family. If those times were happy you're not remembering them right. Ads that show happy Brady Bunch type families playing board games all smiling and laughing are a trap set up by the toy industry to rake in the cash.

These happy ads hide the truth - during the lockdown if you play board games as a family you will regret it.

4. Buy a pair of noise cancelling headphones - even better, buy a dozen so everyone can have them including your dog. You're going to need them because you'll start to get tired of hearing everybody's voice.

5. Read loads of books.
There's some great deals at the moment - and here comes the shameless plug - my publisher is offering the first book in my Detective in a Coma series, Vile City for just £5 via PayPal. The book usually retails at £8.99

There are lots of other great books on the Caffeine NIghts online store.
Posted by Jennifer Lee Thomson, Jenny Thomson at 20:11 No comments:

How to kill your neighbour - my WIP


Yes, that title got your attention, but I'm not really advocating killing your neighbour although I am currently writing a crime novel with the working title How to kill your neighbour.

For one thing, it's hard to get away with it because you will be considered a prime suspect due to your proximity to the victim. And that goes double if you've had a yell off with them in front of your other neighbours.
For another, to kill some neighbours would take a stake through the heart or a silver bullet.

You know the kind of neighbour I mean? The kind that would rather launch a foul-mouthed tirade at you for some imagined slight rather than a 'Good morning.'

Again, I'm only kidding about killing your neighbour. Honest. Where would it get you? Prison for life.

One person who did get away with killing their neighbour - at least in a short story I read - did it in the most novel of ways.

The method used was contaminating the solution their contact lenses were in so their eyes started to sting and smart as they drove to work and guess what, they crashed their car and died in the wreck.

I haven't decided how my killer will murder their neighbour but I'll keep you updated on how I'm getting on with Killing my Neighbour.

Posted by Jennifer Lee Thomson, Jenny Thomson at 18:50 No comments:

Why my latest killer force-feeds their victims in Cannibal City


Years ago I lived on an island. Not one of those remote Islands but one of the most accessible ones you are likely to get. One day I was walking past a local restaurant and I was shocked to see something on the menu that's so cruel the production of it is banned in my country but not the sale.

You can read about what happened next on my companion blog for my book Living Cruelty Free: Live a more Compassionate Life here

That product was Foie gras which is made by ramming a metal or plastic pipe down a duck or goose's throat so their livers swell abnormally to around ten times their normal size.
Foie gras is French and translates as fatty liver.​
There's never been an appetite for reversing the ban on producing it in the UK where I live because even farmers who could make money out of producing this vile 'foodstuff' find the cruelty involved too much.


When I was writing book 2 in the Detective in a Coma series I wanted to do something a bit different. Come up with a different method of murder whilst also letting people who don't know into the sick little secret of how cruel a 'food' Foie gras is.

In Cannibal City, my killer craves Foie gras but is so sickened by how it's obtained he decides that he'll make a human version instead. Pretty gross but as well as coming up with a more novel way to kill people, it also gives folk an insight into one of the cruellest things humans eat.

A food so cruel that when Scottish tennis star Andy Murray discovered what it was he banned it from being served in the hotel he owns.

If you want to see how it's used in Cannibal City you can check out the book now. 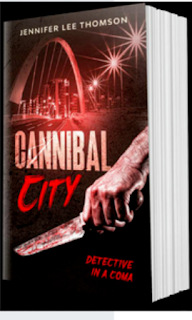 Posted by Jennifer Lee Thomson, Jenny Thomson at 21:02 No comments:

Cannibal City (Detective in a Coma, Detective Waddell) is available on pre-order

"Sometimes the monsters are real." 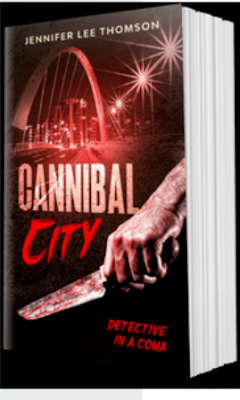 "A tough case and your partner is sleeping on the job."

Posted by Jennifer Lee Thomson, Jenny Thomson at 10:30 No comments: