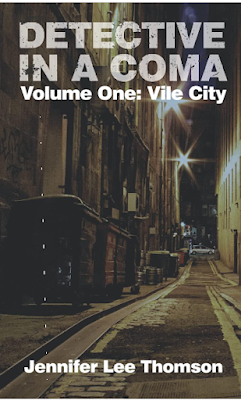 DI Duncan Waddell is on the brink of a nervous breakdown – he thinks his best pal DC Stevie Campbell, who’s been in a coma since he was attacked by a suspect, is talking to him.

When office worker Shelley rushes to her boyfriend’s aid after he is attacked, she is abducted. She wakes up in a strange room with no memory of how she got there.

On the case, Waddell finds himself in a desperate race against time to uncover the truth behind the abduction or Shelley dies.

To do this, he and his team must delve into the seedy underbelly of Scotland’s swingers’ scene and a world where women are tricked into the sex business and traded like cattle.

Vile City is out now, published by Diamond Books in paperback and eBook.
You can buy it by clicking here 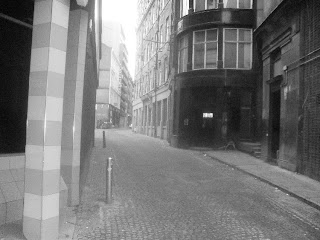 ~ Read an extract ~
Chapter 1
Stuart was hiding something. Shelley could tell. She was always the one who’d had to wake him because he could block out the shrill of the alarm clock. Nowadays, he was up before her, grabbing the mail whilst she slept. And he’d started making breakfast – nothing much, just tea and toast, more than he’d ever made her in their near three years together.

When she’d ask him if anything was wrong, he’d shrug his shoulders, give her a wee smile and say everything was fine. She knew he was lying because his face went even paler, making his freckles stand out as if they’d been drawn in by a kid with a coloured pencil. She never pushed it, maybe because deep down she was worried that he’d tell her he’d met someone else.

The No.76 bus was empty when they clambered on board – one of the benefits of working until eleven at night in a call centre, was that there was no need to scoot past a sea of legs and become a contortionist to get on and off a bus.

Their cold breath filled the air with ghosts as they walked towards Waterstones, Shelley pausing to peek at the new crime fiction releases showcased in the illuminated windows, whilst Stuart fidgeted with his watch. He was always footering about with something since he’d given up cigarettes and it drove her mad, but at least it didn’t fill his lungs with tar and make the house smell like an overflowing ashtray.

“I need to have a pee,” he announced, as they came to the dimly lit lane off Mitchell Street that reeked of eau de Glasgow: decomposing takeaway, urine and other bodily fluids.

She groaned. “Can’t you wait until we get home, Stuart?” She knew she’d pronounced his name “Stew-art” as she always did when she was annoyed with him. She couldn’t help it.

What made men think it was okay to urinate in public?

Stuart looked pained. “Sorry, I can’t. Too much coffee tonight.”

She let him walk on ahead of her and whilst he scooted down the alley, she stood outside the amusement arcade, pretending to look in so she wouldn’t be mistaken for a prostitute. It’d happened to her once when she’d got off the bus alone. Stuart hadn’t been working that night.

Five minutes later, she was so cold she couldn’t feel her nose and Stuart still wasn’t back.

She turned the corner to look for him, fully expecting to see him ambling back towards her with that jaunty walk that always made her smile. He wasn’t there.

Anger welled up in her chest. Had he started smoking again? He swore he wouldn’t.

There was one way to find out.

She headed down the alley. The sole light was provided from some nearby buildings, so visibility was poor.

She’d walked a few steps when she spotted a bundle of rags on the ground. Was someone sleeping there?

She moved closer, squinting into the dim light. Stuart was lying motionless on the ground. He must have tripped and knocked himself out as he hit the concrete.

She ran to him, calling out his name, the squeezing in her chest waning slightly when she knelt and heard him groan.

She pulled her mobile phone from her bag to call for an ambulance.

She didn’t make it to the third digit. A gloved hand clamped across her mouth and nose, cutting off her airways. The phone fell from her grasp, clattering onto the cobbles. Terror gripped her and she couldn’t breathe.

As she struggled, her assailant pressed his mouth to her ear. He was so close that it occurred to her that if anyone saw them, they would think he was her boyfriend whispering sweet nothings in her ear.

“Your man’s been given a strong sedative. He’ll wake up with a sore head and nothing more. If you scream, I’ll kick him several times in the head and he’ll never get up again. Do you understand?”

The voice was cold and emotionless She didn’t recognise it and there was an accent. Not from around here.

She nodded under his hand. Then did something he didn’t expect. Backheeled him in the groin.

There was a satisfying yelp as he released her.

She ran, arms pumping away like Usain Bolt, down towards the café at the end of the alley and safety.

She’d almost made it when he grabbed her arm and hauled her back. An electric shock shot from her elbow to her shoulder as she tried to pull herself free. He was too strong.

He dragged her towards him.

Before she could scream, he punched her in the face and she went down with a thud, jarring every bone in her body, momentarily stunning her.

As she fought to get up, he punched her in the back, and she fell again.

The last thing she saw was the pavement rushing towards her before she blacked out... 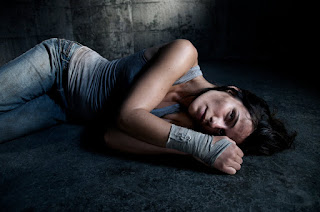 Posted by Jennifer Lee Thomson, Jenny Thomson at 04:35 No comments: 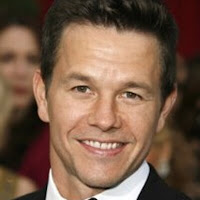 DI Waddell is no Mark wahlberg

I'm currently working on a new crime novel. It's a police procedural and the main character is an amazing human being both physically and mentally. They have no bias.
Handsome and charming, they run ultra marathons and raise wads of money for charities in any free time they have.
Their partner is very supportive of their job and they have an amazing family.
Thankfully, I am lying and I am not writing a book with the person I described as a the lead character because I hate them already.
Let's face it, who wants to read about perfect, unflawed characters like the one I just described?
I know I wouldn't.
How boring would that be?
The reason is simple - someone who's the perfect human being would be so boring to read about. For one thing, how do you have conflict in a story with a character like that? Well, they're perfect so how would they possibly get into any conflict with anyone?
And, they would solve the crime within the first two pages.
perfect is boring
When I am reading, I like my main characters with loads of imperfections and conflicts. That's how I came up with DI Duncan Waddell. He's a decent man, relatively good at his job but he has problems. Not the least of which is that his friend and colleague Stevie Campbell, who was attacked by a suspect he was trying to apprehend and ended up left in a coma is talking to him.
And only to him, leaving Waddell to wonder if he's losing his mind.
He has other problems too. He eats too much junk food so has a paunch on him. If someone were to play him in a movie it definitely would not be someone like Mr chiselled abs Mark Wahlberg.
He consumes way too much sugar, so is a borderline diabetic and that's why his wife Isobel is trying to force him to eat healthier.
He loves Glasgow, the city where he lives and works, but is fast coming to despise because of of the sick and twisted crimes comes across. Hence the name of the first installment featuring him is Vile City.
Sometimes he even hates his job so much that he disappears into the nearest quiet place to have a swig of whiskey and wishes he had become a history professor as he is a Scottish history buff.
Waddell is flawed and human.
I hope that is why readers will like him.
~ Vile City, the revamped first book in the Detective in a coma series is out soon from Diamond Books
Why not what come and meet him? You may like him. ~
Posted by Jennifer Lee Thomson, Jenny Thomson at 05:10 No comments: 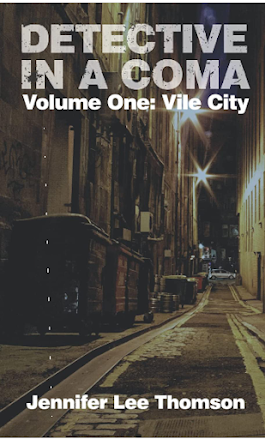