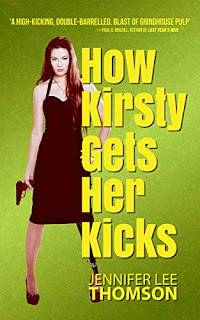 This is the coolest introduction to a book ever.


What's it about then?
A tale of skullduggery that plays out on the mean streets of Glasgow…One-legged barmaid Kirsty is in a shit-load of trouble after she kills one of gangster Jimmy McPhee’s enforcers with a stiletto heel to the head after he gets a bit too handsie.Now she’s on the run from the gang boss who loves to torture his victims before he kills them, with a safe-load of cash she stole from him and a hot gun. And she has company—a choirboy barman Jamie who just happens to be the only witness.She needs to survive long enough to spend the cash.How difficult can it be to catch a “daft wee lassie with one leg?” Glasgow hardman Jimmy McPhee is about to find out. Kirsty’s made a laughing stock out of him and he doesn’t like that one wee bit.Bring together a one-legged barmaid who’s legged it with a safe load of dirty cash, a spurned gangster’s wife who wants a walking womb for her mail order sperm, a giant birthday cake and a mad chase to the end, and you’ve got How Kirsty Gets Her Kicks: one freaking minute at a time.
Posted by Jennifer Lee Thomson, Jenny Thomson at 19:58 No comments: